Founded in 1960, Mesa Water District currently provides water service to more than 110,000 customers in an 18-square-mile area of Orange County, California. Mesa Water predominately uses local groundwater, recycled water, and conservation to meet 100% of its demands. Mesa Water has 4 import water stations that provide backup supply capability during seasonal high peak demand periods.. From Mesa Water’s eight wells, groundwater is pumped from Orange County’s groundwater basin which underlies north-central Orange County from Irvine to the Los Angeles County border and from Yorba Linda to the Pacific Ocean. It is replenished by water from the Santa Ana River and imported water purchased from the Metropolitan Water District of Southern California.

Mesa Water sits above a portion of Orange County’s groundwater basin that includes a supply of amber-tinted water hundreds of feet below the clear-water reserves. Of very high quality and safe to drink, the deep water aquifer has a slight amber tint resulting from the buried ancient redwood forests that grew in the area. In planning since the 1980s, the District’s Colored Water Treatment Facility went online in 2000 to tap into this water source, using a revolutionary ozone filtration process to remove the color from the water. This facility reached its capacity and was shut down in December 2010. Between 2011 and 2012, the District constructed the Mesa Water Reliability Facility (MWRF), using nanofiltration (NF) membrane for color removal from the amber-tinted well water. The benefits of the MWRF include the following:

Commissioned in late 2012, the MRWF officially began operation in January 2013. The MWRF consists of two, 2-stage primary NF trains operating at 16 gfd and 87.5% recovery. A secondary NF train treats the concentrate stream from the primary trains, achieving a total plant recovery of 98%. During the startup process, and within the first months of operation, Mesa Water staff transitioned from the operation of ozone treatment and chlorination of wells, to operating and maintaining a technologically advanced water treatment system including pretreatment (sand separation and cartridge filtration), nanofiltration membrane, and post-treatment facilities (stabilization and disinfection). Within a few months of operating their first membrane facility, Mesa Water staff developed expertise in the following operations issues:

This paper will describe the Mesa Water Reliability facility’s treatment system, documenting each of the items above and how Mesa Water staff addressed them. 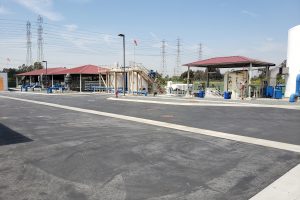 The Water Replenishment District of Southern California, (WRD) owns the[...]

After interviewing five engineering firms for its Santa Margarita Conjunctive[...]