Warning: file_put_contents(): Only -1 of 122 bytes written, possibly out of free disk space in /home/spiengin/public_html/wp-content/plugins/wp-optimize/includes/class-wp-optimize-htaccess.php on line 135

Warning: file_put_contents(): Only -1 of 122 bytes written, possibly out of free disk space in /home/spiengin/public_html/wp-content/plugins/wp-optimize/includes/class-wp-optimize-htaccess.php on line 135
 Time to Clean Again? Changes in Cleaning Frequency and Effectiveness at the Reynolds Groundwater Desalination Facility – SPI

Time to Clean Again? Changes in Cleaning Frequency and Effectiveness at the Reynolds Groundwater Desalination Facility

Time to Clean Again? Changes in Cleaning Frequency and Effectiveness at the Reynolds Groundwater Desalination Facility

Sweetwater Authority (SWA) owns and operates the Richard A. Reynolds Groundwater Desalination Facility (RAR) in Chula Vista, CA. The facility has a maximum daily production of 4 MGD sourced from six brackish groundwater wells that draw from the San Diego Formation. The facility consists of three Reverse Osmosis (RO) trains in a 20:10 array operating at an 81% recovery. Due to high manganese concentrations in the groundwater, the bypass (blend) water is treated through an iron and manganese removal system. During the dry season the facility maintains a flux of 9.5 gfd, increasing to 12-14 gfd in the wet season when more wells are available. In 2016, the plant will be expanded to a 10 MGD facility with the addition of three new RO trains and 5 new groundwater wells requiring a six to eight month shutdown during construction.

SWA has hired Separation Processes Inc. (SPI) to conduct a performance audit that reviews current and historical performance of the facility along with a discussion of the RO cleaning effectiveness. Operational data is collected daily by water treatment plant operators and entered into a normalization software database. The data is then analyzed for several parameters including; feed water characteristics, recovery, flux, specific flux, normalized differential pressure, normalized permeate conductivity, and normalized conductivity rejection. Once the data is compiled and normalized an assessment of the membrane performance and condition is made. Then, potential areas for optimization are identified including, an evaluation of the CIP process for the effectiveness of the current RO cleaner, recommendations for new RO cleaners, and procedural improvements.

The current RO elements were installed in January 2010 and have historically been cleaned annually. However, in 2014 the fouling rate began to increase and a second cleaning was performed within the same calendar year. In only 7 months specific flux and normalized differential pressure values had already reached values which historically had taken 12 months to achieve. The fouling rate continued to increase in early 2015 prompting another cleaning in June/July. This paper will look at past and present operational data and discuss changes observed in cleaning frequency and effectiveness….

You can read the full paper by clicking here

You can see the entire presenation by clicking here

Evaluation of Scinor Membrane for Retrofit and Future Expansion at SPMWD

The San Patricio Municipal Water District (SPMWD or District) has[...]

After interviewing five engineering firms for its Santa Margarita Conjunctive[...] 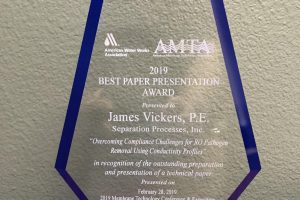