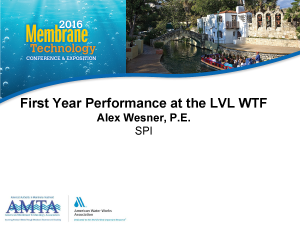 Lans Water Treatment Facility (LVLWTF) was originally commissioned in 2002 by the Water Replenishment District of Southern California (WRD), producing 3.0 million gallons per day (mgd) from tertiary municipal wastewater effluent from the adjacent Los Angeles County Sanitation District’s (LACSD’s) Long Beach Water Reclamation Plant (LBWRP). The original facility included microfiltration (MF) ahead of reverse osmosis (RO), followed by ultraviolet light (UV) treatment for disinfection and destruction of trace nitrosamine compounds.  Product water from the facility is used as a supplemental source of injection water in the Alamitos Barrier, a coastal seawater intrusion barrier.  The primary source of barrier injection supply is domestic water which makes up the roughly 8.0 mgd required to operate the barrier. Injected waters migrate into a potable water aquifer, making the project supplies a source of indirect potable reuse (IPR) and subject to regulations by the State of California.

The facility was master planned for up to 8.0 mgd of product water capacity and in 2012, WRDSC proceeded with expanding the facility. 8.0 mgd is the peak flow requirement into the barrier and so with the expansion, LVLWTF product water would become the primary source of supply. The expanded facility design was developed concurrently with recently promulgated regulations in the State for IPR projects. The main process train of the facility was largely unchanged, with the exception of the UV system which was converted to a UV-advanced oxidation (UVAOP) process. One larger exception was however made—the target operating recovery of the facility. The original LVLWTF had a daily residuals discharge limit of 0.76 mgd. Because of capacity limitations on the local sewer system, the expansion needed to be accomplished without increasing the flow of wastes—essentially increasing the end-to-end process recovery from 80 percent up to 92 percent.

A pilot test program was implemented that proved a concept of reclaiming backwash waste from the MF process units and RO brine from the RO trains. MF backwash is treated through dissolved air flotation (DAF) and secondary backwash treatment MF. RO brine is fed to a subsequent concentrator RO system. The full scale facility expansion was constructed with this separate residuals processing train accompanying the primary treatment system units, within the site limits that were planned on expanding only the primary treatment train equipment. The facility was successfully commissioned at the end of 2014.  As the end of 2015 approaches, this paper looks back at the first year of facility operations.

You can read the complete paper by clicking here

You can see the entire presentation by clicking here

Separation Processes, Inc. (SPI) is pleased to announce that it[...]